Among others, the owner, designer, and captain of the newly built RMS Titanic stand in awe of the impressive feat of engineering. As the crew arrives and the passengers board, the mosaic of characters is introduced, and their conversations reveal their social status and satisfaction with life. When the ship’s owner demands that the captain increase the speed to arrive in New York early, the Titanic tragically collides with an iceberg, tossing the voyage into a state of chaos and the passengers into a situation of immense danger.

During the run of “Titanic, The Musical,” there was a display about Titanic survivors, Mrs. Sylvia Harbaugh Cadwell (Mercherle) and her family in the lobby. The display also covered Sylvia’s work at Community Players from 1924 through 1939. Historian Bruce Parrish worked with author Julie Hedgepath Williams on her book A Rare Titanic Family. Players provided photos, playbills, and articles on Sylvia’ work with Community Players. In the celebration of Player’s 90th season in 2013, Dr. Williams presented an informative talk about her book and had the opportunity to hear a reunion of cast members sing two songs from “Titanic.” 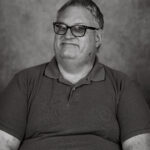