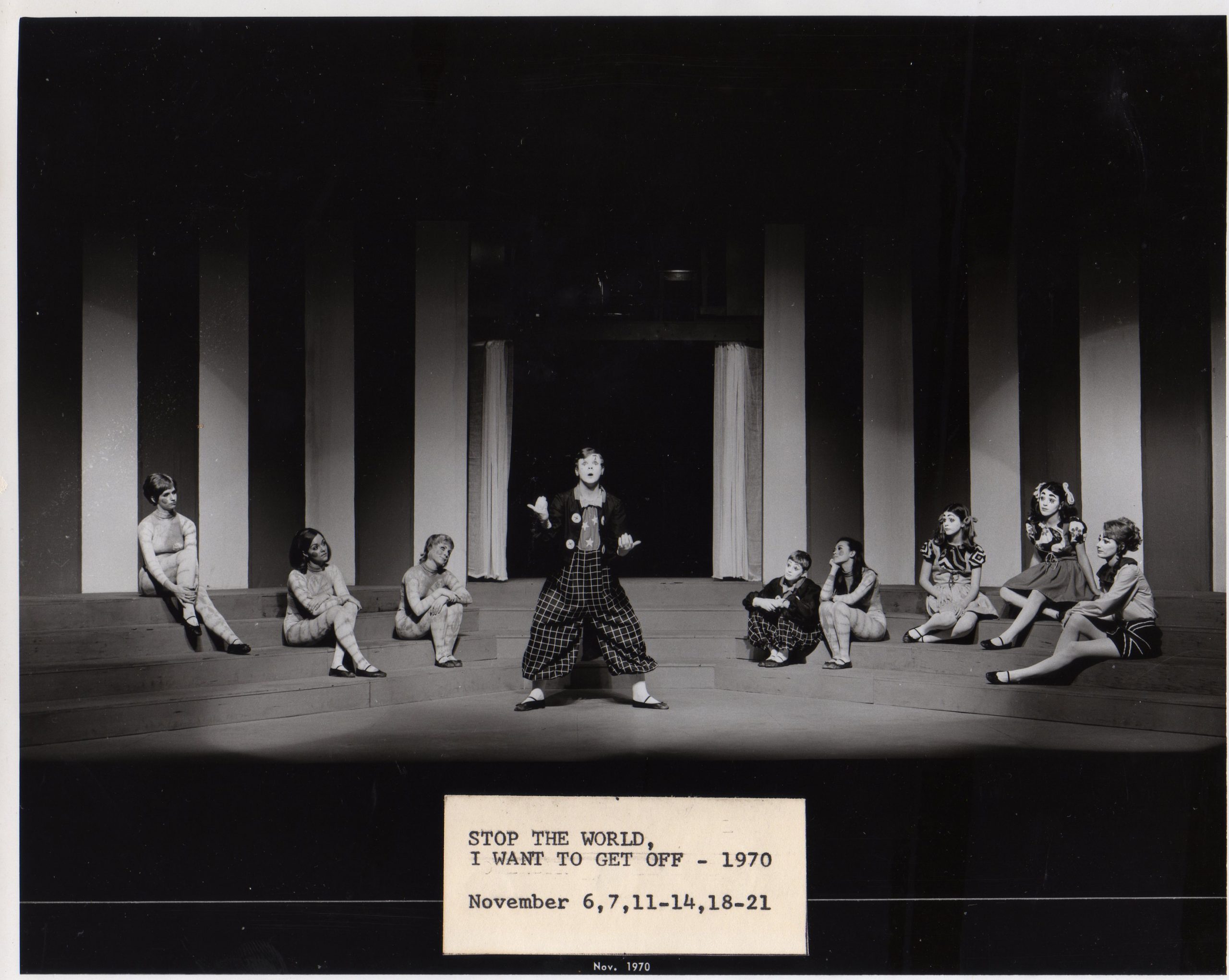 Stop The World! I Want To Get Off!

Set against the backdrop of a circus, the show focuses on Littlechap from the moment of his birth to his death. Each time something unsatisfactory happens, he calls out,”Stop The World!” and addresses the audience. After being born, going through school, and finding work as a tea-boy, his first major step toward improving his lot is to marry Eve, his bosses’ daughter, after getting her pregnant out of wedlock. Saddled with the responsibilities of a family, he is given a job in his father’s factory. He has now two daughters, Susan and Jane, but Littlechap truly longs for a son. He allows his growing dissatisfaction with his existence to lead him into the arms of various women in his business travels: Russian Anya, German Isle, and American Ginnie. He searches for something better than he has in life. Only in old age does he realize what he has always had—the love of his wife—is more than enough to sustain him. When Eve dies, he begins to write his memoirs and comes to terms with his own selfishness. At the moment of his death, he watches his second daughter give birth to a son. When the boy nearly dies, Littlechap intervenes, allowing Death to take him instead. Littlechap mimes his own birth, beginning the cycle once again.

Not too many years ago, the opening night of a Community Players production was a gala affair-with women in evening gowns and men in their best suits. Being a first night attendee at Community Players was the fashion. Champagne in the lobby followed the performance and tickets were at a premium. Players hoped to recapture that splendor with the opening of “Stop The World! I Want To Get Off!” Special invitations were sent out to the Mayors of the Twin Cities, the Presidents of both Illinois Wesleyan University and Illinois State University, past Players’ Presidents, past board members, and Trustees. The ladies were asked to wear evening gowns and the men suits. There would be Champagne after the opening night performance for all attendees, cast and staff of the production. A Daily Pantagraph photographic article once again captured the magic of first night attendees celebrating the opening of the musical. At the curtain speech, President Jack Ingold asked Past presidents and all other dignitaries to stand and take a bow. It was hoped that the Daily Pantagraph article and review would help spark season ticket sales.