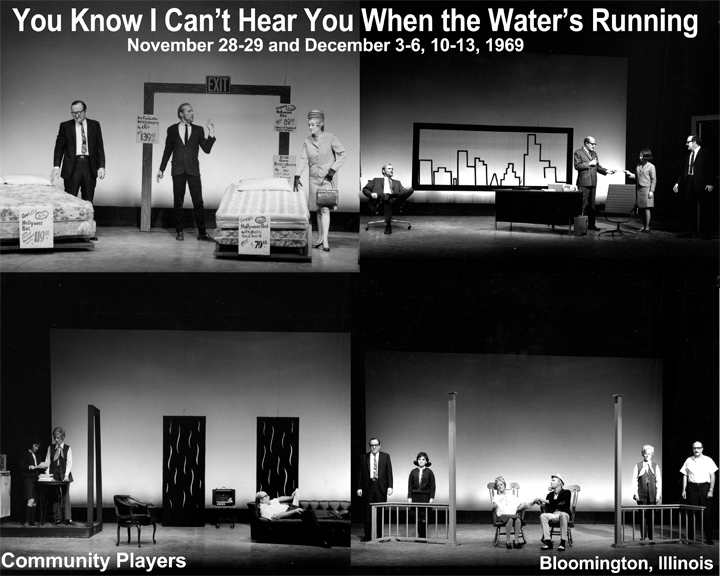 “You Know I Can’t Hear You When The Water’s Running” is a collection of four unrelated one-act comedies:

In “The Shock Of Recognition,” playwright Jack Barnstable auditions Richard Pawling for a role that requires nudity and discovers the overeager actor is more than willing to show his stuff.

“The Footsteps of Doves” focuses on Harriet and George, a married couple shopping for twin beds after many years of marriage. George, who is opposed to the change, strikes up a conversation with Jill, a considerably younger fellow shopper who shares his view.

In “I’ll Be Home For Christmas,” Chuck and Edith realize how empty their marriage has become as they await the arrival of their adult daughter, Clarice.

“I’m Herbert” is a scattered conversation between Herbert and Muriel, an elderly couple with memory problems who try in vain to recall their earlier relationships.

This modern comedy of four one acts has perhaps the longest title in theatre history. “You Know I Can’t Hear You When The Water’s Running” was billed as recommended for adult audiences only. A second article in The Daily Pantagraph used the words “frank,” “modern,” and “contemporary” to describe the play. Nevertheless, letters to the editor quickly followed the opening night performance. The choice of the play and several actor’s performances were criticized highly. Although the board responded to these letters, their response only led to several more critical letters-to-the-editor as well as letters to the Players’ board.

In the program, a brief history of one act plays on Broadway appeared, covering the early twentieth century through to the late 1960’s. The program also included an “In Memoriam” for Miss Edna F. Goodwin. Miss Goodwin was Players’ historian for almost 17 seasons until her passing on November 18, 1969. Miss Goodwin was the second longest serving historian in Players’ history.

Jack Barnstable (The Shock of Recognition)

Herb Miller (The Shock of Recognition)

Dorothy (The Shock of Recognition)

Richard Pawling (The Shock of Recognition)

Salesman (The Footsteps of Doves)

Harriet (The Footsteps of Doves)

George (The Footsteps of Doves)

Jill (The Footsteps of Doves)

Chuck (I’ll Be Home For Christmas)

Edith (I’ll Be Home For Christmas)

Clarice (I’ll Be Home For Christmas)