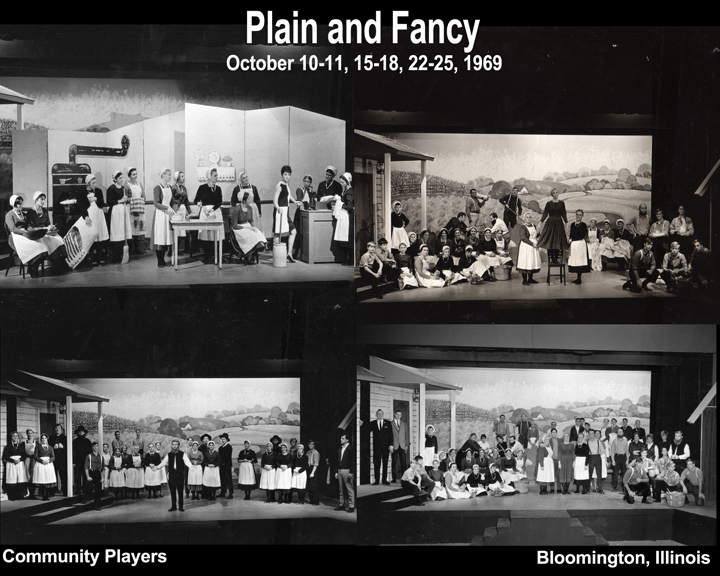 New York City sophicates Dan King and Ruth Winters travel to the village of Bird-in-Hand in the Amish country of Lancaster, Pennsylvania to sell a piece of property to Jacob Yoder, who intends to present it to his daughter Katie and her intended Ezra as a wedding gift. While there, Dan and Ruth become involved with the local villagers, including Hilda Miller, who mistakes Dan’s kindness for romantic overtures as well as Ezra’s banished brother Peter, who returns to claim the hand of his childhood sweetheart, Katie.

Book by Joseph Stein and Will Glickman
Music by Albert Hague
Lyrics by Arnold B. Horwitt

By the opening of “Plain and Fancy,” season memberships only totaled 1,512, a loss of 166 memberships. The low number was said to be the result of having to raise the season ticket prices. Should the final season tally be 1,700, the Players would be in fine financial shape for the season; unfortunately, the final number was closer to 1,600.

The program for “Plain and Fancy” included a brief three paragraph history of The Pennsylvania Dutch along with two recipes. The first recipe was for Spannferkel (Roast Baby Pig) which should be served with sauerkraut and fried potatoes. The second recipe was for Zimmerstern (Cinnamon Almond Cookie). For their work in the carnival scene of “Plain and Fancy,” a big thank you was given to the performers of Illinois State University’s Gamma Phi Circus for their contribution to the musical. For the Act II opening big musical number, “How Do You Raise a Barn,” the Yoder barn was rebuilt onstage.

At the October 16, 1969 board meeting, board member, Jobie Tick, proposed the building of a scene shop and storage area addition to the west end of the original building. Discussion of such an expansion project was postponed until the November meeting to give board members time to come up with some practical ideas about what could be done with this addition to the building.