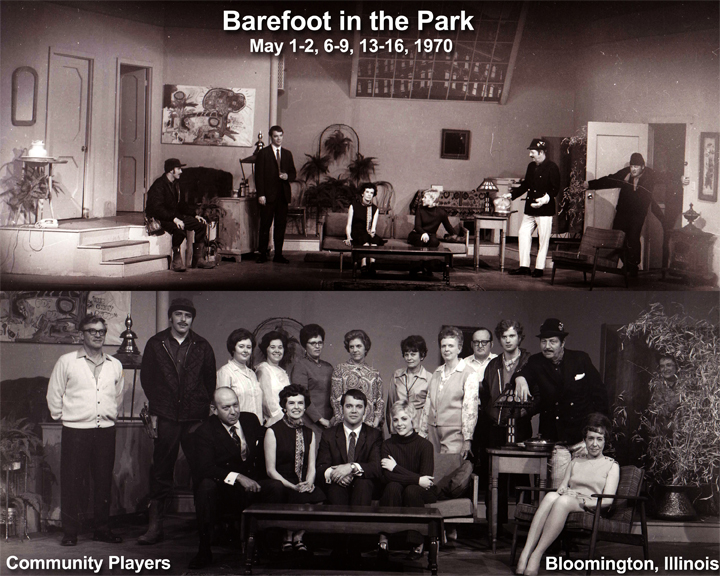 “Barefoot in the Park” tells the story of Corie and Paul, newlyweds, fresh from their honeymoon. Corie is still enthralled by the recent sexual awakenings and the adventure that comes with youth and marriage. She wants their passionate romantic life to continue at full speed. Paul, however, feels it is time to focus on his burgeoning career as an up-and-coming lawyer. When they don’t see eye-to-eye about their apartment, their neighbors, and their sex drive, the new marriage experiences its first patch of rough weather.

In the program for “Barefoot in the Park” was an announcement for the future plans to enlarge the Community Players’ building. The expenditures called for an addition to cost approximately $60,000.00. The article not only provided what areas would be expanded and how they would be used, but included two architectural drawings by Harry Riddle, the architect for the original Players’ building.

In Players’ past shows, the name “George Spelvin” has appeared twice in cast lists. This name was used when a person wished to keep his or her identity secret before the curtain rose on the show. Usually it was someone stepping in to help out with a minor part, or a part with no lines. This name was also used when the actor was well known. In “Barefoot in the Park,” the name “Royy Fudpucker” was used as the name of the actor playing the delivery man. In the play, the actor has no lines, just a bit of comic business. In addition to the fake name, a fake biography was created. Royy Fudpucker was in reality actor, director, board member, Tony Holloway.